Photo by Louis Pellissier via unsplash.com

Disclaimer: The following post addresses some of the problems with French music in very broad terms. It is not meant as an attack on all French music or specific individuals so everybody take a deep breath and calm down before telling me that I don’t know what I’m talking about.

Not all French music is bad, but it sure is awkward. That’s hardly a vote of confidence, but then I don’t exactly rate French music generally, as I’ve openly acknowledged before, on my About Me page no less!

You don’t need me to tell you that French music doesn’t have a good reputation internationally. Apart from a handful of individuals and groups who have crossed the great divide, and Vanessa Paradis, no-one’s heard of most artists who are regarded as musical national treasures within the country. Who outside of France has heard of Francis Cabrel, Michel Berger, Johnny Halliday or M? Stepping into France’s music scene, especially via its TV music channels, is like entering another world altogether. Often, a very scary world indeed…

Within France, people are quick to say that it’s because of the language barrier, but British and American music has no such problem, including in France where people are far from fluent in English. Yet we ingest an awful lot of musical influences from across the Channel and the Atlantic. So why all the awkwardness?

I personally think it is quite simple: you need to know French to be able to appreciate a French song; you don’t need to understand a word of English to enjoy an ‘Anglo-Saxon’ one.

This is why people like Rihanna, Kanye West, Katy Perry and any of the other top 50 artists of the moment are popular despite the fact that their song lyrics are unlikely to ever be compared to Shakespeare. The tunes are catchy and fun to sing along to. They can get away with poor lyrics because their songs make you happy or make you want to dance. I’m not saying all English-speaking music is great by the way, far from it. I don’t particularly rate the three I’ve mentioned above. And there are plenty of decent English-speaking artists who combine a good tune with strong lyrics. Ed Sheeran, Adele and Mumford & Sons come to mind, and there are many others. The fact remains that these and others like them have a broad appeal that French music lacks.

Many French artists aspire to Shakespearean levels of lyricism; they are wordsmiths and their songs are above all about the words and the clever puns (there’s even a name for it: chansons à texte – literally ‘text songs’), so much so that the music often seems like an afterthought. Many of their songs therefore end up being musically quite simple, conservative and not always very appealing (downright boring in some cases); if they are catchy, they tend to do so in a quiet way. And then there’s the rappers. Not my cup of tea, and there are so many of them! Hopefully most of them have moved beyond the tiring refrain of Nique ta mère, nique la police (f**k your mum, f**k the police) of ten years ago…

People may argue that I’ve not lived in the country for 15 years so I don’t know anything about French music anymore. They aren’t wrong! I am definitely out of touch with what’s popular these days, although last time I was there, there was an awful lot of bubblegum pop of the lowest common denominator. For the sake of fairness, I went on Spotify and looked at the French Top List and it was telling. The list was overwhelmingly American, with a small French representation by Black M, Stromae and Jul, all of whom are R&B hybrids and sound a bit like Sean Paul, which is quite frankly horrifying. There’s also one woman, Indila, whose song I’m having a hard time classifying.

You might also say that there are plenty of super talented French artists who get no recognition outside of the country but should. I agree and I reckon it is true inside France as well, maybe even more so, that you have to get out of your way to find the good stuff because the mainstream media will not promote it. But the fact remains that French music is an acquired taste outside its borders and it has nothing to do with other nationalities being biased or not recognising talent and France being misunderstood and under-appreciated. No, it’s because on the whole, French music is not very good.

I’m a big fan of English-speaking pop that I can sing along to whilst making dinner, Swedish metal bands like Katatonia

to get gloriously depressed with, the indie scene and bands like Coldplay, especially when they provide instant party games like ‘find as many words starting with ‘para’ as you can to replace Paradise with’ (hours of fun!) but sometimes, I like to revisit my introspective French music. I’ve done some research for this post (!) and tried to find stuff I’ve enjoyed from the last ten years to share with you so you can get an idea of what we’re dealing with. So below are a couple of very different artists that I have enjoyed. There’s a certain melancholy and nostalgia to their songs that never fails to make me feel very French indeed. It’s a weird feeling I can’t quite explain but hopefully you’ll get it. You’ll also I think see why they won’t really translate past the French border, despite that they are quite good songs (I think so anyway). I’ll translate the lyrics below alongside the French version.

The first artist is my personal favourite across the board. Her name is Zazie and she is a lyricist and a wonderful feminist writer. Her songs often feel like poetry put to music, but sometimes I wish she would work a bit more on the musical side of things, because some of her stuff can feel quite bare and basic, or awfully 80s. The first one is called Si J’etais Moi

This next one was a bit harder to translate because its meaning is gender-dependent (thank you French language for being so complicated – and beautiful!). I think it is self-explanatory but to clarify just in case, in the French ‘ceux’ is male and ‘celles’ is female. The song is called Aux Armes Citoyennes. It is a call to arms to women that also echoes back to the revolutionary song and French national anthem La Marseillaise with its chorus of Aux armes citoyens.

who is super depressed about the world and wants you to know all about it. 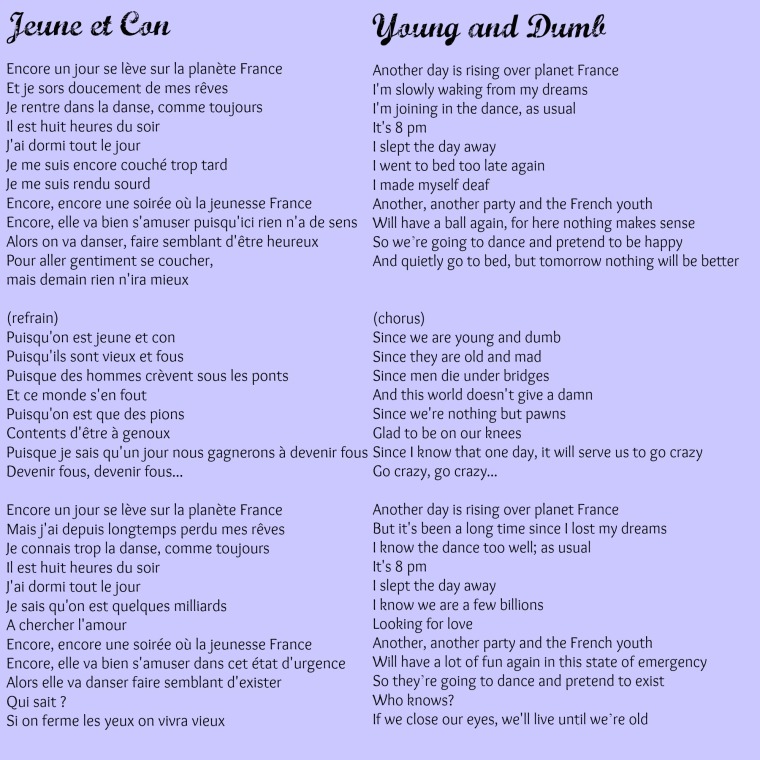 I hope this gives you a taste of things – and possibly confirms in your mind that you’re never going to get French music! Good thing you don’t have to; for all the complaining the French love being unique at the same time that they wish they were more recognised. To be honest, I often find that the sort of music that French people like is just plain weird so don’t beat yourself up. And if you have a favourite French song, I’d love to hear about it in the comments!

Disclosure : Amazon Affiliate links are included in this post. If you click through to Amazon, any purchase you make supports this site.