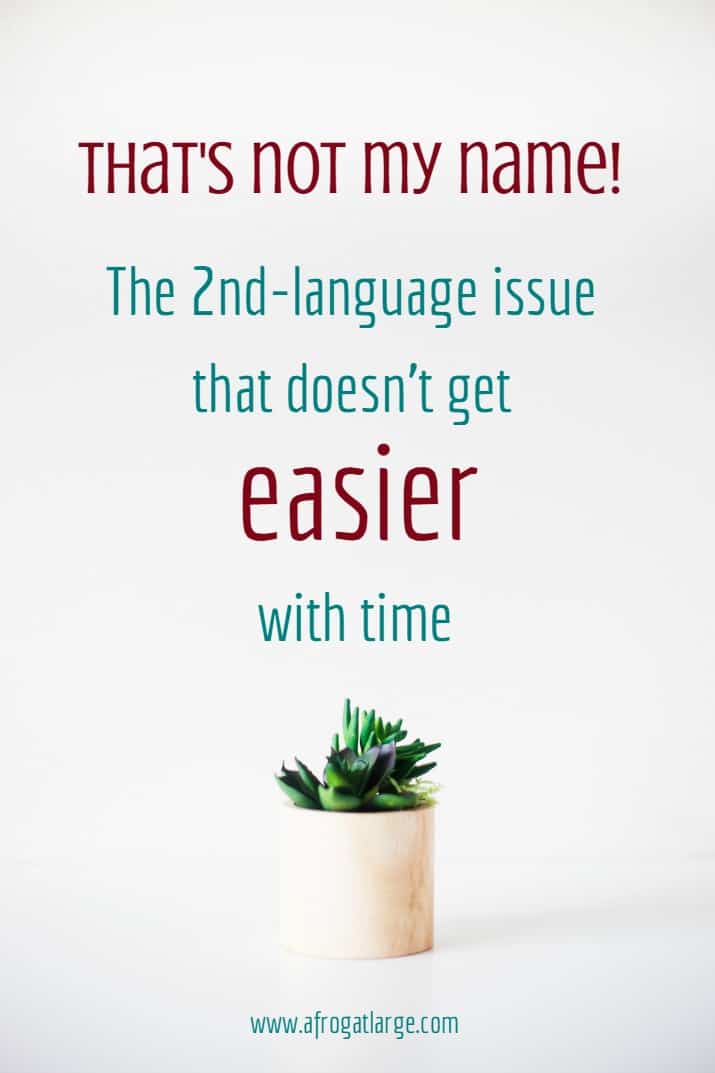 You would think that after 18+ years in England, I would have pretty much faced all the language issues I ever would and I’d be able to draw a line under ‘English language skills’. I dare say my skills are pretty advanced at this stage (apart from ‘mysterious accent that comes up from time to time’) and yet, I still regularly face this one particular language problem, thanks to the most confounding aspects of language-learning, how to pronounce people’s names. There’s nothing worse than getting someone’s name wrong and having to ask them to repeat it not once but several times over, and yet the pitfalls appear to be endless.

One of my early challenges was when I started to work in a bank’s back office taking calls about account problems, part of my grand plan to tackle big language hurdles in a gradual way. The first stage was ‘learn to understand people face to face’. This stage at the bank was the ‘talk to people on the phone’ (ie when you can’t see their face and body language to guess what they might be saying) and stop getting scared that they’re going to be Scottish and you won’t understand a word. I had to call someone called Thompson, and, you guessed it, made a real hash of it and must have sounded like a complete moron. How was I supposed to know you didn’t pronounce it ‘thump-son’?

At my next job, I had a colleague called Siobhan, who I avoided talking to for ages because I didn’t even know where to begin to try working it out!

Nowadays, you would think I wouldn’t have this struggle any more. Not true. I currently work for a lovely lady called Paula. She’s Dutch. Her name’s pronounced Paola, and I still occasionally forget this. And then there’s this other person that I mostly email but occasionally need to call and her name is Grainne. I can’t remember how to say it from one week to the next, and I’m positive I am actually going to have to make myself a phonetics note to keep for such occasions that I need to speak to her, lest I embarrass myself once again.

I guess the moral of this story is that you never stop learning, neither should you expect to or settle in thinking you have seen it all!

It’s one of those embarrassing things that must happen to everyone when they are not speaking their mother-tongue. There are some things I just can’t say. Like ‘rabid’. Does it rhyme with rabbi? I never remember. Thankfully it’s not a word I use regularly.

There are others that I have to use on a daily basis that cause me just as much trouble. Take ‘muslin’ for example. When I used it the first time, I thought it would be so simple. It looked simple. Unlike plough, which I now know doesn’t sound anything like drought, but rhymes with cow (I mean, how does that even work?). And don’t talk to me about ‘sauce’, it took me months to master that one. And Thompson. I worked for a bank in my early days in England and had to call someone called Thompson. They were a bit confused when I asked for Mr Thump-son…

Back to ‘muslin’. I picture the word in my head, imagine myself saying it, and I still can’t figure out how it goes. And believe me, we have a lot of muslins around what with the Babykins puking and dribbling all over the place. I get lots of practice. And yet every time, every single time, I say it wrong.

‘Pass me the muslin, hubby please, the Babykins has dribbled milk on my black sleeve again!’

‘The what? The Muslim? We don’t have one of those around but I don’t think he’d be able to help.’

Some words are just there to confound me.